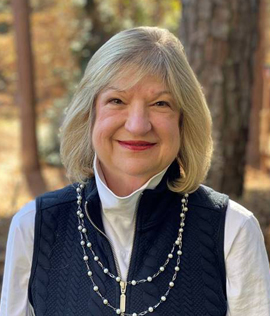 Attorney Elaine G. Levine represents individuals, married couples, partners, and families as they make their end-of-life decisions, as well as estate representatives in probate matters after the death of a loved person. Together, Elaine and her clients work to protect spouses, partners, children, and grandchildren with appropriate guardians and trusts, as well as to minimize the obstacles, difficulties, and financial burdens associated with aging and death. By documenting each person’s expectations and desires, Elaine strives to ensure smooth transitions in times of accidents, stress, decline, and death.

Elaine Levine practices in the area of Wills, Trusts, Estate Planning, and Probate. She has worked with approximately 800 families as they make their end-of-life personal decisions and plan for their families’ futures. Elaine also represents the estates of those who have passed away in Georgia, whether clients for whom she drafted their Wills or family members or friends of clients as they wind their way through the Georgia probate process.

Elaine brings to her clients a unique approach developed over the past 35 years in law practice.  Clients who complete their Wills with Elaine are free to consult with her periodically by telephone or email regarding a range of personal or legal issues. In this way, Elaine becomes a trusted legal advisor on a variety of family and financial issues.

Elaine is a member of the Board of Directors of the Estate Planning and Probate Section and the Elder Law Section of the Atlanta Bar Association .  She also just completed three years of service on the Board of  the Financial Planning Association of Georgia. Elaine is a past president and treasurer of the Georgia Association for Women Lawyers (GAWL) and is involved with The Temple, previously serving as Chair of the Religious School and on the Temple Board of Trustees.  For seven years, she taught two Literary Leaders classes at her children’s elementary school, Morris Brandon Elementary, and is the past Treasurer and past member of the Executive Committee of the school’s PTA.    For nine years until her children had all gone to college, Elaine also taught parenting classes for parents of teenagers at seven private schools and one public school in Atlanta. Elaine was awarded the “Woman of Achievement Award” by the Jewish Federation of Atlanta for her work at The Temple and in the Jewish community.

Before founding her own firm twenty-five years ago, Elaine was a senior environmental attorney at Jones Day Reavis & Pogue (Atlanta, 1992-94), an attorney with the U.S. EPA (Atlanta, 1989-92), an associate with Kilpatrick Stockton, LLP, practicing in the areas of commercial finance, real estate, and bankruptcy (Atlanta, 1983-89), and a judicial clerk for Chief Judge Gilbert S. Merritt on the United States Court of Appeals, 6th Circuit (Nashville, 1982-83).

The Georgia Association for Women Lawyers:  Elaine has been an active member of GAWL since 1983.  She served as treasurer, programs chair, president, and immediate past president on the Board of Directors over a seven year period.  Since her service ended on the Board, Elaine has continued to speak at numerous GAWL seminars and lunches, has led two mentor circles of eleven lawyers (one for three years and one that was formed in 2009 and continues).  Elaine is an active participant of The Mentorship Committee and regularly attends two Neighborhood Networking Breakfasts.  In addition, Elaine has mentored many new women attorneys or attorneys transitioning to new firms or new practices over the past fifteen years. She conceived of the GAWLedu program which GAWL began offering in 2014 and which has now graduated about 80 participants.  Elaine is involved in planning this year-long program for new attorneys, which has met at her home for the past five years.

GIG:  Elaine founded and for ten years ran a group, affectionately called “GIG,” of 30 women who live on her street in the Garden Hills neighborhood of Buckhead.  GIG members have met in each other’s homes for 58 themed potluck dinners, have gone on four annual mountain retreats, and have helped each other when members have new babies or difficulties in their families.

The Temple:  Elaine served for five years on the Board of The Temple, located in midtown Atlanta.  In addition, she served on the Religious School Committee for ten years and chaired the Committee for the 2004-05 school year.  Elaine’s three children all attended Religious School through confirmation at The Temple.  Elaine was also on the five person task force which investigated and then oversaw the building and opening of the Temple’s highly successful preschool program.  She currently participates in the Temple Theater Group and is a founding member of the Temple Sandwich Salon.

The Temple Zaban Night Shelter:  Elaine has made countless dinners for the residents of the Shelter and has facilitated groups of students and adults cooking and serving at the Shelter for over twenty years.

Literary Leaders:  For seven years, Elaine taught literature classes to 4th graders and 5th graders before and after school at Morris Brandon Elementary.  Each class met for twenty-four weeks.  Elaine also trained other parents to teach the Literary Leaders program.

Pace Academy:  Elaine served on the Board of the parent education program called Parent Network (formerly P2).  She also taught the parenting classes for parents of teenagers, which covered topics including driving, drinking, drugs, sexual issues, communication, accountability, the internet, and other issues facing teenagers.   In addition, Elaine served as the 7th/8th grade parent representative from 2001-03.

Parenting Classes for Parents of Teenagers:  As an outgrowth of the program she helped to develop for parents at Pace Academy, Elaine taught parents of students who attended six other metro Atlanta area private schools and one public school, including Woodward, Galloway, Holy Innocents’, Sutton Middle, Davis Academy, Atlanta International School, and Westminster.   Each of her classes were attended by 20-35 parents and were held over a period of six weeks.

Pace String Parents Support Group:  When Pace Academy added orchestra to the curriculum, Elaine formed the Pace Parents Strings Support Group, which she chaired for five years, to enhance the experience of the string players both in and out of school.  She organized numerous community service concerts, cooking and serving at the Temple Shelter, programs and refreshments at concerts, and other enhancements to the strings program.